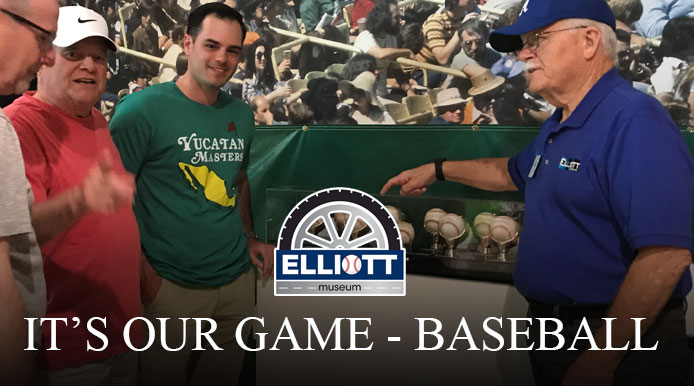 Everyone has a baseball story. “Sometimes sharing their stories have brought tears to their eyes,” says Frank Spera of his experiences in the Museum’s Baseball Gallery exhibit titled It’s Our Game. The gallery includes signed baseball cards, baseballs, bats, and other memorabilia. But it comes alive when the Museum’s docents are there to share stories with visitors. Frank Spera is now available to present stories that are in his book “cardboard time capsules” (available in the Elliott Museum Store) gleaned from his research and experiences while serving as a volunteer docent at the Elliott Museum.

The Elliott Museum has a comprehensive signed collection of baseball-related items including autographed baseball cards, baseballs, bats, and other artifacts. The collection of autographed baseballs now numbers more than 250. The collection sports signatures by players from the Major Leagues, the Negro Leagues, and the All-American Girls Professional Baseball League (AAGPBL). Among the most famous players represented are: Ray Dandridge, the Negro League; Hank Aaron, the Negro and Major Leagues; June Peppas (AAGPBL); and Jackie Robinson, Nolan Ryan, Ted Williams, Derek Jeter, Bob Feller, Ralph Kiner, and Babe Ruth of the Major Leagues.