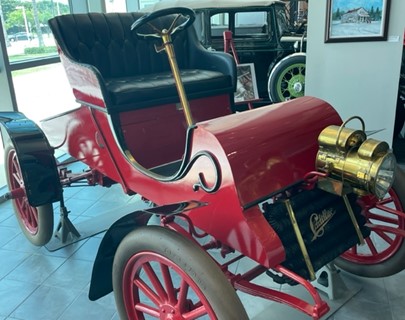 This car was originally developed by the Henry Ford Company. Ford’s investors brought in Henry Leyland, a respected machinist to work with Ford. Henry Ford fell out with his investors and left the company and Leyland was put in charge. He changed the name to the Cadillac Automobile Company in honor of Antoine de la Mothe Cadillac, the French explorer who helped to found the city of Detroit.  The first Cadillac was completed on October 17, 1902, and sales began in 1903 with the model at the Elliott. 120 years later, Cadillacs are still in production. Interestingly, Henry Ford went on to establish the Ford Motor Company using the same basic design as the Cadillac, powered by a two-cylinder engine designed by Ford. Therefore, early Ford cars and early Cadillac cars appear to be almost identical. The Elliott Cadillac is one of the earliest known produced and is serial #113.