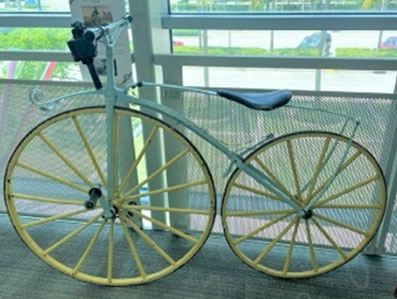 The Boneshaker was the first true bicycle with pedals. These bicycles have cast iron frames, wooden wheels, and metal tires. The early ones were often made by blacksmiths and wheelwrights. The Boneshaker used wagon style wheels and the seat was mounted like a buggy seat. They were heavy and awkward and were best ridden on grass or smooth garden paths. The bicycle wasn’t very comfortable because of the irritating vibrations produced by the wheel impact with the ground; therefore, its name, “boneshaker.” It was nonetheless a success, both for producers and riders. They were not called bicycles until the 1870s … before that they were known as Velocipedes. The bike on display at the Elliott is missing its brakes, seat and spring and is in poor condition. Its crudely made and was probably built by a blacksmith. It is, however, a good example of the wooden wheels and hubs with metal banding holding them together and the bar for the pedals can be seen on the front wheel axil.