Get Tickets Now info@hsmc-fl.com
1886 Benz Patent-Motorwagen … the birth of the automobile
← Previous Product 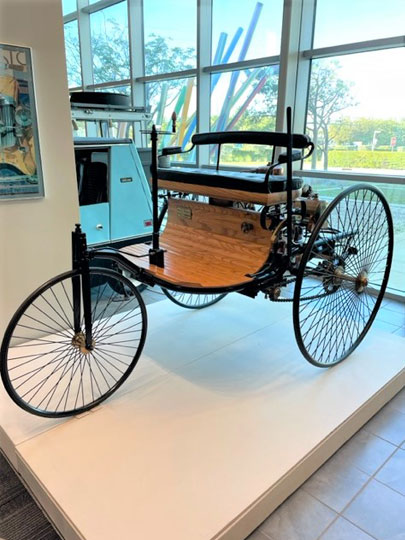 An important part of the Benz story is the first long-distance automobile trip. In August of 1888, Bertha Benz, Karl’s wife, decided to take the Benz Motowagen on a 66 mile trip to visit her mother. Bertha identified and solved several major problems on the trip. Because the Benz lacked power climbing hills, she identified the need for a second gear set. As a result of several long downhill sections, she stopped and asked a shoemaker to nail leather to the brake blocks, thus inventing brake linings. Gasoline was only sold in pharmacies as a cleaning product, promption numberous stops to buy fuel on the trip, identifying the need for gas stations.

Bertha advised her husband of the success of her trip by telegram. Her trip demonstrated the feasibility of travel by motorwagen. In 2008, the Bertha Benz Memorial Way was established to commerate her historic journey from Mannheim via Heidelbert to Pforzheim (Black Forest) Germany.

The vehicle on display is one of the 90 recreations.