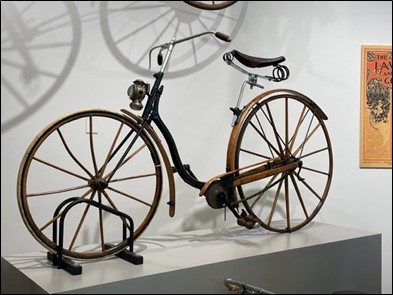 The $100 Elliott Hickory Safety Bicycle, was first introduced in 1889, was unique in that part of its framework and its wheels were made of hickory wood. The low curved frame could be mounted and ridden by women wearing the long skirts of the time. However, some male bicycle riders objected to women riding, so some bicycle makers, fearful of offending their male customers, either didn’t offer a low framed model or would advertise it as a “boy’s bicycle.” Some doctors advised that women were too “delicate” to ride bicycles, and newspaper editorials from the era stated that “women should not show their ankles or go out on the road unchaperoned when riding bicycles.” Despite these negative reactions, Sterling Elliott was happy to provide bicycles designed for female riders, and many women enjoyed the freedom and healthy exercise that bicycles such as this one delivered.