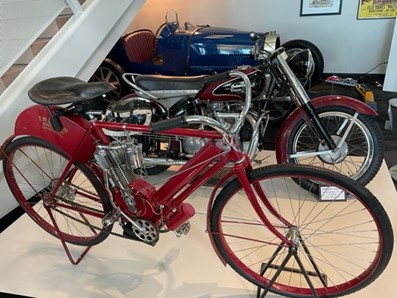 George Hendee and Oscar Hedstrom were bicycle builders and racing champions working within the same regional network between 1895 and 1901. While they both loved bicycles, Hendee’s focus was on business and Hedstrom’s on mechanics, and both were highly regarded for their skills. It was a partnership that would, within a decade, create the largest motorcycle manufacturer in the world. The launch of the Hedstrom’s motor bicycle took place on Saturday, June 1, 1901, at the Cross Street hill in Springfield where a reporter at the scene described a crowd of 400-500 people watching as Hedstrom rode his machine up the 19-percent grade of the loose-gravel street with power to spare. The earliest Indians were called “Camelbacks” because the fuel tank was in a hump shape over the rear fender and directly behind the rider. The Elliott’s 1904 Indian was originally owned by Harmon Elliott.